How many WIFI extenders can I use?

WIFI Range Extender vs WIFI Booster explained – Which is the best?

How many WIFI extenders can I use?

Yes, For bigger homes with a bigger space and rooms, it is wise to use up to two extenders to make sure that every corner is covered. However, The more meshed range extenders you add without using directional antennas to manage interference, the more hidden nodes you end up with, meaning that you can experience diminishing returns as you add more consumer-grade extenders to an indoor network.

Mesh networking is a relatively inefficient topology where instead of using a hub and spokes or a star-shaped arrangement to reduce the number of hops between a serving node and a client node, any node can connect to any other node.

In Wi-Fi equipment, meshed range extenders are range extenders that can communicate between each other, hopefully not on the same channel(s) being used to backhaul traffic to the host router. Ideally, any two meshed range extenders would find a channel with minimal interference when networking with each other. Some, but far from all, support Fast Roaming so that client devices are rehomed to the extender with the highest signal strength at a given location.

Many traditional range extenders use a single channel for both backhaul between client devices and the source router as well as for traffic management, halving throughput as a result. With multiple meshed range extenders, you’d need to ensure that all can use multiple non-overlapping channels to avoid cutting your throughput. Also, range extenders repeat a diminished signal, meaning that daisy-chaining them would repeat diminished signals of diminished signals. As shown below, most of the attenuation occurs in the first meter (3.28 feet) from the access point’s radio chain. If a typical 23-dBm (200-milliwatt) AP has 40 dB of free space path loss (not even accounting for obstructions other than air) in the first meter, this means that a client device a meter from the AP is receiving only 0.01% (0.019 mW) of the original output power. The more that this signal is repeated, the lower the overall modulation needs to be, and the lower the overall throughput in Mbps is. 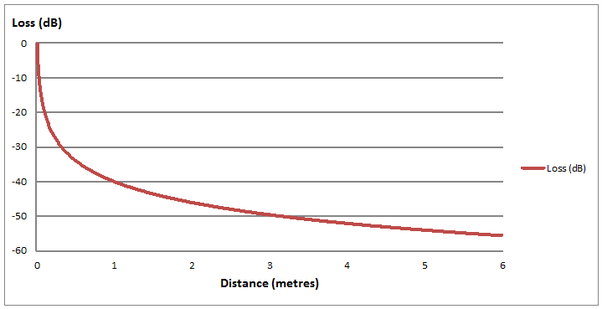 To get around this limitation, mesh topologies offer any-to-any connectivity (as with the Rajant Breadcrumb example below), rather than point-to-point-to-point backhaul, hopefully with the nodes negotiating the shortest path among themselves for each network segment. With a mesh, one could also manage the recycling of certain channels in a cellular configuration – except for the fact that unlike cellular networks with fiber backhaul between cell sites, a Wi-Fi mesh backhauls over Wi-Fi. This increases the number of network hops, adding latency and an increased risk of packet retries. 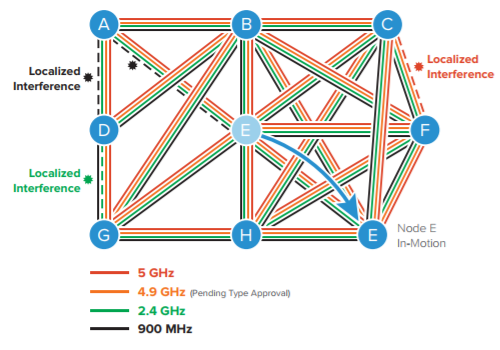 A mesh can work reasonably well for enterprises because the baseband radios and antennas are often physically discrete, meaning that the Wi-Fi AP typically has low-loss cabling running between it and a separate antenna on a mast or mount. Parabolic dishes or dual-polarized antennas can be paired to maintain highly coherent line-of-sight links. Obviously, you can’t try that at home. So what you end up with, using omnidirectional u.FL/IPEX antennas inside a tiny extender shell, are hidden nodes, creating collisions where extenders can’t ‘hear’ each other, but still interfere on each others’ channels. The more meshed range extenders you add without using directional antennas to manage interference, the more hidden nodes you end up with, meaning that you can experience diminishing returns as you add more consumer-grade extenders to an indoor network.

Reference: Mark Allen ( Chief Misanthropic Officer ). ” What does wireless mesh mean? ”  originally appeared on Quora, the place to gain and share knowledge, empowering people to learn from others and better understand the world.