What is a DDoS attack?

What is a DDoS attack?

What is a DDoS Attack video is powered by IBM Technology.

What is a distributed denial of service attack?

We are your Cyber Security and Data Protection Specialists.

Your IT and Tech Mates Tips: Your Business-critical server outages and monetary losses can result from distributed denial of service attacks (DDOS attacks). When DDoS events are detected and prevented early enough, they can be stopped before they overwhelm company networks.

DDoS expands to “Distributed Denial of Service”, and is a major concern for internet service providers in the current times. Technically, it is a malicious attempt that disrupts the normal traffic of a server, service, or network by overwhelming its infrastructure with a flood of internet traffic.

DDoS attacks are effective as they utilize multiple infected systems as sources of the attack traffic. These systems can be desktops or other IoT devices. In other words, a DDoS attack is just like a traffic jam preventing the movement of vehicles.

Now, how does a DDoS attack actually work?

DDoS attacks are carried out using a network of systems that are on a network. The systems used to get traffic are infected with malware. This allows them to be remotely controlled. These infected devices are called “bots” and a group of them is called a “botnet”.

Once a botnet has been established, attackers can direct an attack by sending remote instructions to each one of them.

When a victim’s server or network is targeted, each bot sends a request to the target IP address. This causes the target network to become overwhelmed resulting in a denial-of-service to the already existing traffic.

When you see your website or some service suddenly become slow or unavailable, it is an obvious sign that a DDoS attack has happened. However, other reasons such as a legitimate spike in traffic can also create similar performance issues, making identification of the true reason difficult. But, Traffic Analytics Tools can help you spot some telltale signs of DDoS attacks:

A flood of traffic from computers who share a single behavioral profile like IP address, location, web browser version.

A sudden surge in requests to a single page.

There are other signs as well which may vary as per the type of attack.

A network is composed of several layers of different components. The OSI(Open Systems Interconnection) model below explains a framework used to describe network connectivity: 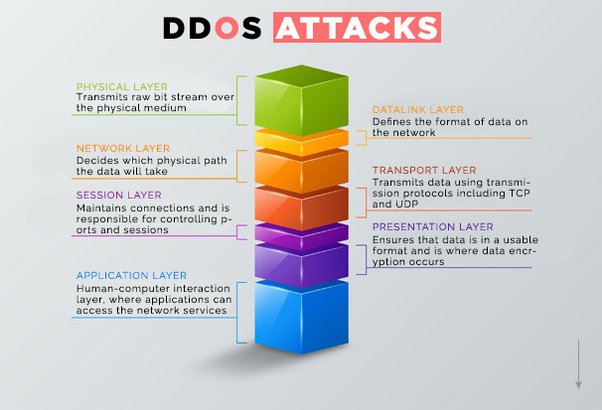 Thank you, Quora and TTB.

All in all, DDoS attacks can be classified into three major categories:

When you can differentiate between attack traffic and network traffic, you can focus on adopting ways to alleviate the attacks.

DDoS traffic may arrive in several forms. A multi-vector DDoS attack uses multiple pathways to overwhelm a target thus distracting your mitigation efforts. Moreover, mitigating an attack that targets multiple layers of the protocol stack at the same time requires a variety of strategies to counter different trajectories.

Your IT and Tech Mates protect your sensitive information, organizations, and critical IT systems from cybercrime and data breaches. Book a free cyber security audit now on Call Now or Book Now.

Reference: TTB Total Security ( TTB Total Security is a leading cybersecurity company, we believe in providing advanced security solutions to our customers. ) – “What is a DDoS attack?”  originally appeared on Quora, the place to gain and share knowledge, empowering people to learn from others and better understand the world.