Wired vs Wireless Internet. What’s Best for Your Home?

Which is better: Wired or wireless?

Wired vs Wireless Internet. What’s Best for Your Home?

For many people, wireless is “good enough”, but it will never be as fast, stable, or reliable as a wired network.

First, understand that the way wired and wireless connection speeds are measured is different, and it is slanted to make wireless routers sound way faster than they actually are.

For example, your router might have Gigabit wired ports and support “1300 Mbps!” on the wireless side. A Gigabit is only 1000 Mbps, so obviously the wireless side is faster, right? Stop right there.

The difference is that EACH Gigabit wired port can handle 1000 Mbps up and down at the same time. If it was wireless, we would call it a “2000 Mbps!” port. Next, a better router will be able to handle that same “2000 Mbps!” on EVERY port at the same time. (Lots of consumer gear won’t quite keep up, but it will do at least most of that.) Therefore, a basic home router with 1 Gigabit WAN port and 4 Gigabit LAN ports would be labeled “10,000 Mbps!!!” if it was measured the way that wireless devices are measured.

Now, look at the Wireless side. That “1300 Mbps!” is split across ALL Wireless clients, both up and down. So, if you had 10 clients, and they were all doing equal traffic up and down, you couldn’t possibly get more than 75 Mbps up/down per device. In reality, wireless has a lot of other limitations around interference, collisions, etc. that make the 75 Mbps average completely unachievable in that situation.

Next, understand that the “1300 Mbps!” is in a shielded laboratory environment, talking to an optimal number of clients, and the specific device may not have even been tested to do that. More often it is the total possible speed of all of the wireless radio standards added together, whether the router can handle them all at the same time or not.

Finally, interference and collisions. Interference is when multiple devices are attempting to use the same wireless frequency, even though they are not talking to each other. Your microwave oven and your neighbors WiFi can both cause interference for your wireless network. Interference can caused dropped packets, which need to time out and be resent. Collisions are when multiple devices on the same network attempt to talk at the same time. Unlike debating presidential candidates, both devices stop talking and wait a random amount of time before attempting to talk again. This is how collisions are handled on modern computer networks. Collisions cause small, random delays in transmission. Both interference and collisions cause “jitter” or variation in the transmission time on networks. This is especially bad for video conferencing, VOIP calls, and real time gaming. 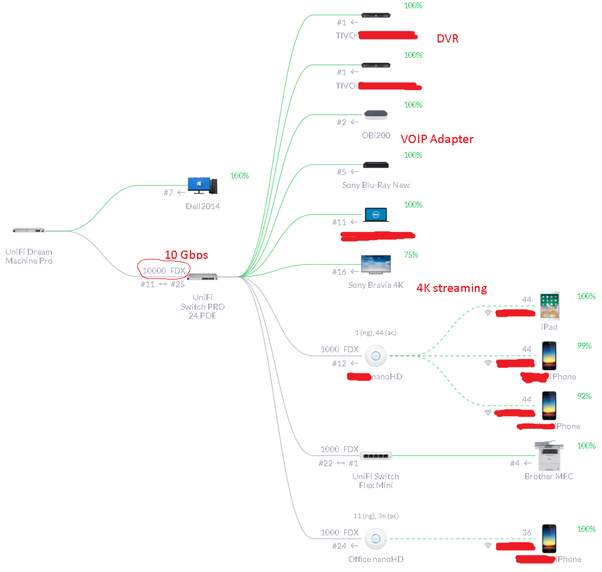 The solid gray and green lines are wired. The dashed lines are wireless connections. See that 10 Gbps wired link between my router and my switch? Equipment that can do that is kind of pricey, but it is readily available today. (That would be “20,000 Mbps!” in wireless-speak.)

If you are optimizing your wireless network, the most important devices to wire are those that will be doing HD or UHD video streaming (because they receive so much traffic), and computers and consoles that you use for gaming (because they send and receive so many packets, and the packets are time sensitive.) Next, I would wire my computers (because software updates can be huge). Somewhere in there don’t forget to wire your Wireless Access Points, if any, because that will prevent the “double wireless hop” that mesh systems introduce. Finally, I would look at VOIP devices (because the traffic is time sensitive), and then everything else.

If you “Wire everything that can possibly be wired”, and only use wireless for phones and portable devices, WIFI is great! And, it can even be “good enough”.

Reference: Scott Walker ( Building WIFI networks since 2004. ). ” Is it still worth having wired Ethernet connection to home computers as many wireless routers have faster networks connections? ”  originally appeared on Quora, the place to gain and share knowledge, empowering people to learn from others and better understand the world.

Which WIFI Band Should I Use for My Router